muchacho's ping fluctuating between 0 and 48

[!!!]Hirntot Server Player Stats
Forum rules
This is an international forum. PLEASE speak ENGLISH! If you have problems with english, please try to post in english and repeat the post in your motherlanguage.
Post Reply
27 posts

hyperloop wrote: ↑
Sat Apr 11, 2020 2:51 pm
Im not sure if this is an attempt to prove anything, cause it isn't. The fact remains, his ping fluctuates like crazy.

Has to do with his actual ping being very low, that's why overdrive can't replicate it.
Top


I'm on windows 10 so no way I'm ever going to get as low as windows 7, but i'm curious nevertheless

He has 240Hz with 120 FPS, he tried all possible combinations, both on Win10 and 7 and that's the only smooth one not giving stutter/tearing. PM him on discord if you've got any ideas.
Top

he got his input latency down to 15, I'm on windows 10 and having trouble getting it below 100, was about 175 before I started tweaking the shit out of my windows.
Top

hyperloop wrote: ↑
Sat Apr 11, 2020 2:51 pm
Im not sure if this is an attempt to prove anything, cause it isn't. The fact remains, his ping fluctuates like crazy.

Has to do with his actual ping being very low, that's why overdrive can't replicate it.

Its this. His ping is actually really low, and fps mods make it flactuate even lower. But hey, he's on 240hz, so 120fps lock sounds about right to me. The ping in ET is generally bullshit. There is a way to see your true ping in et - by setting snaps to 1, or timenudge, I forgot which one, but good luck with that since its a server locked command (to 20 or smth like that) pretty much everywhere (thus the 48 pings on everyone). His ping in reality is probably around 30ish, while the other majority got 70-150 (even though its displayed as 48). He's german if im not wrong, wheres the server at? Probably not far away from him. Generally it's quite easy to know if someone lags TO YOU - #1 they are visually warping, #2 delayed bullets, u're dropping dead behind walls and yep, if thats happening, they got advantage over you (whoever tries to convince me otherwise can go f*** themselves). I've experienced none of these with muchacho, but thats me, he aint lagging to ME and I bet he doesnt lag to everyone else either, hes on a good rig and I assume lives close to the server.

This topic sounds kinda of a 'he's using smth on purpose to lag' and no, hes not. He's equally good now as he was with 48 ping for years (well... i been on for 2-3 years, so dunno before that). Its pretty simple really, u spec someone and that will tell you everything... he is easily one of the most legit skillers there - great aim, great movement, unlike plenty of others who aim like shit and move like shit yet they get these paranormal hitregs or bullshit headshots for whichever reason (humanized aimbots, no knockbac or spread hax or smth X), cornn just banned one of those shitheads (chronic).

And Monty... muchacho lost plenty of 1vs1s, just not against you probably (did anyone ever lose a 1vs1 against you?). Man it'd be nice people would drop the muchacho whine once and for all and frankly drop the whine on all other skillers who've been playing there THE SAME for years. (keyword 'THE SAME'. If someone suddenly got a 30%-50% skillboost overnight, thats alarming of course).

Time nudge determines delay of incoming packets being considered in the gamestate, sort of an artificial ping. It can be negative number as well, then everything will be predicted (well, more predicted). Without antilag, it might be useful.

Snaps of 1 would cause huge lag, more like a 10 would make a difference (default is like 20, or 40?). It's a number of snapshots server sends you every second and anyone setting it low will put himself in disadvantage.

What worked for me on a test server was changing cl_maxpackets to 10 or 20 - not really good for playing, but it reduced the ping number from 32 to 8 (which is just a few ms more than the mean ping).

It's just a number and most of the time, it's wrong. You can estimate continent or planet of the player from it, but that's it.
<sCript>why i eyez ya<ScRipt/>
Top

well thought it was around 15 buut its quite lower

@drevo latency on W10 is around 30, but that was quite some work...
Main issue is still DWM, you cant just disable that shit on W10, this causes unstable latency, so went back to W7...switching between
W10 and W7 is around 20secs with an SSD sooo thats ok

I cant help you guys with the ping...but if you are interested in getting low latency then you can check out these links...

Most of the Tools Used in that Guide:
https://drive.google.com/drive/folders/ ... 4BJ8Jex_l1

And if you would like to install W7 on newer specs, well i followed this, as i had problems getting my mouse and keyboard to work
https://www.overclock.net/forum/6-intel ... -hero.html

@Monty it should have been ShinChan :X
https://crayonshinchan.fandom.com/wiki/ ... character)
music was from Hans Zimmer - just some movie soundtrack 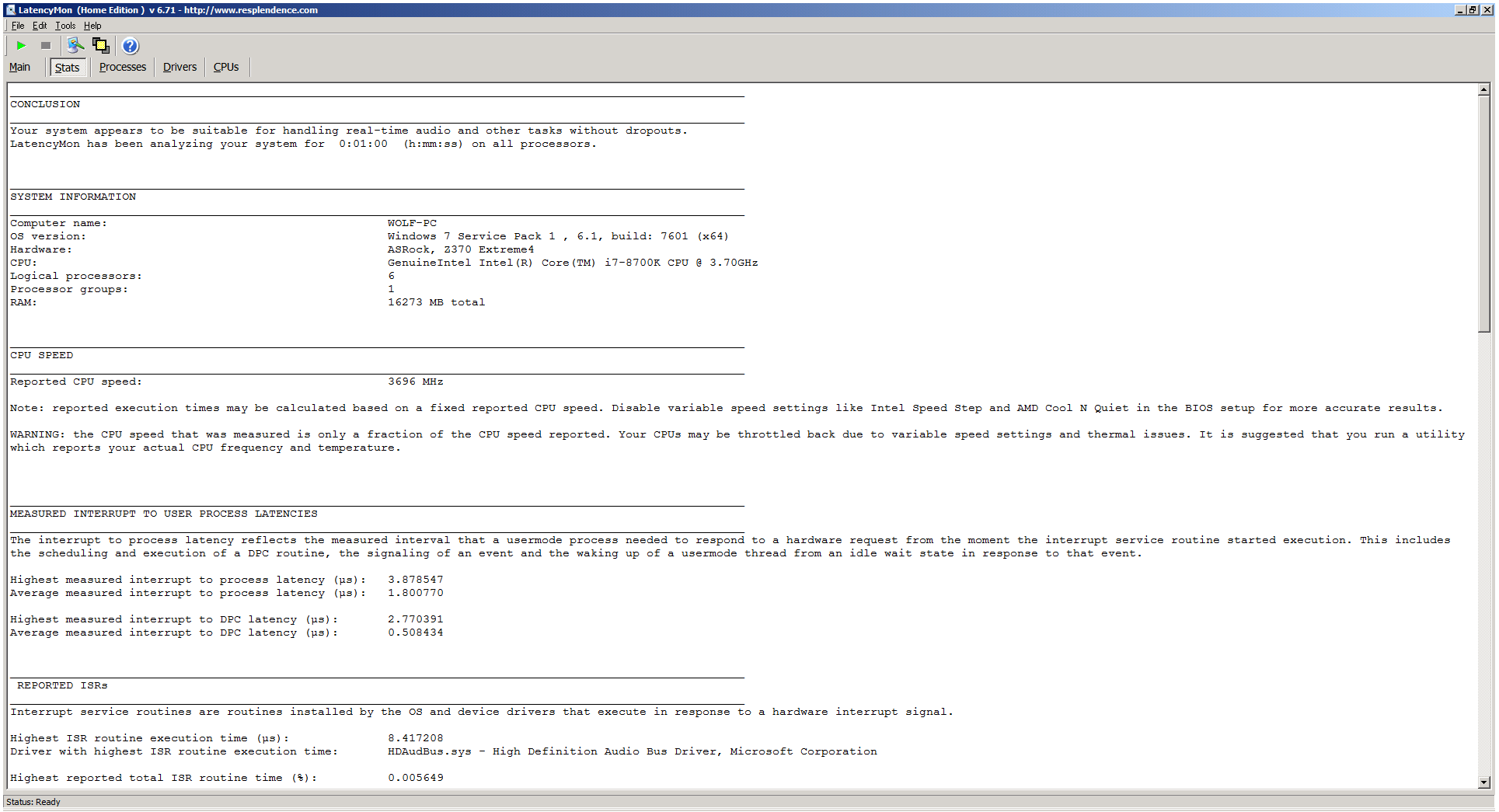 What worked for me on a test server was changing cl_maxpackets to 10 or 20 - not really good for playing, but it reduced the ping number from 32 to 8 (which is just a few ms more than the mean ping).

The number in ET might change but your actual ping wont change. It is just of the way ET measures your ping which is highly inaccurate. You cannot, i repeat, you cannot lower your ping with software. There are some minor tweaks in the way windows handles your packets but in the end the difference is negligable in regards to the hardware infrastructure of your internet provider and the connections (hops) it uses. Timenudge is disabled on most servers these days. Snaps is set to 40 in default etconfig but the servers have always run 20 snaps so 50 ms is correct.

Fuck off aim only trash